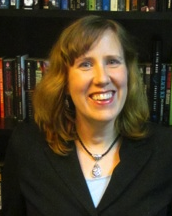 Stacey Longo is the author of My Sister the Zombie and Secret Things: Twelve Tales to Terrify. Her stories have appeared in numerous anthologies and magazines, including Shroud, Shock Totem, and the Litchfield Literary Review.

A former humor columnist for the Block Island Times, she maintains a weekly humor blog at www.staceylongo.com. Longo lives in rural Connecticut.

What was the inspiration for Ordinary Boy?

I knew a boy in high school who was murdered by his stepfather. It always bothered me. I learned a little more about the actual case as an adult, and realized what I’d imagined had happened was much more interesting, so I decided to write that story instead.

Do you see any of your life in your book? If so, how?

Of course—I grew up in the eighties, so Curtis is growing up in a world I’m familiar with. Some of his memories—watching MTV, playing Atari, the People magazine with Rock Hudson on the cover—are certainly mine. And while his relationship with his sister is much different than the one I have with mine, the true moments of camaraderie they share are lifted right from my sister and me.

What was the hardest part of this book for you to write and why?

Killing off Curtis was terrible, even though I knew it was going to happen as soon as I started writing the book. I enjoyed Curtis so much as I wrote him—his sense of humor, in particular—that I considered letting him live. But his character and the story demanded he die, so I had to do it. It hurt, though.

As a female writer, why did you choose to have a male protagonist?

I wanted to stretch my writing chops. I had a pretty non-eventful childhood, and a story about a girl growing up in the eighties and developing a crush on the members of Duran Duran would be pretty boring. Writing about Curtis opened up a whole new world for me.

I’ve always been a writer. I grew up on a dairy farm. When I was bored as a kid, I’d make up stories about the cows and pigs and cats on the farm. Then my friends started asking me to tell them these tales when they came over. I thought “Hey, maybe these stories aren’t just entertaining for me!” and started writing them down. I haven’t stopped since.

I can’t not write. It’s stress release, revenge, and entertainment all in one.

Yes and no. I always thought I’d be like Fitzgerald or Capote, traveling in literary circles and being invited to fabulous parties where we’d discuss books and writing into the wee hours. Ha! But I do get to hang out with other writers and talk about writing, even if it’s on someone’s back porch over coffee. That’s all I can ask for.

Intriguing characters. Plots that aren’t transparent from page one. Well-written prose that makes me think long after I’ve finished the book.

I read everything except romance and fantasy. Non-fiction, fiction, horror, history, true crime, mysteries . . . everything.

Probably King and Bombeck. It’s impossible to write in the horror genre these days and not be influenced by the King. But growing up I also studied the clever nuances of effective humor, and I’ve re-read everything by Erma Bombeck several times.

Probably Bloom County by Berkley Breathed. I quote him daily. Nothing makes me laugh quite like an old Opus or Bill the Cat cartoon.

They’re mostly supportive. I have to be careful when I’m killing off a character in some horrible way to make sure that character doesn’t too closely resemble anyone I know, so as not to cause offense. But my family is my biggest cheerleading section.

I try to write every day, though it doesn’t always happen. And if something’s coming up that I don’t want to put down on paper—like Curtis’s death—I’m a huge procrastinator. I left Curtis hiding in the closet for weeks while I did more important things, like laundry.

I require a lot of coffee while writing—several pots. And complete silence. My husband’s a talker, so it’s hard sometimes.

Did I not mention my husband is a chatterbox?

I’m so fortunate, though, because I have an awesome support system in place. When I’m done with a story, I have several trusted writers I can send it to for critique, and they don’t pull any punches. They’re vital to my process, but when they’re all done, it’s rewrite time, which can be daunting.

I just sold a YA novel, so I need to start the recommended edits on that from my publisher. And I’ve been toying with the idea of writing a novel about Penny Paradise, Curtis’s girlfriend. I thought I wanted to make it parallel to Ordinary Boy, but I’m about 10,000 words in and I think the story really wants to be about her as an adult.

Make sure you love writing, because otherwise, it’s not worth doing. And don’t quit your day job!

On Amazon, of course, and wherever books are sold. Visit my website at www.staceylongo.com to order books, peruse anthologies I’ve been in, and get a weekly dose of all things Stacey on my blog. 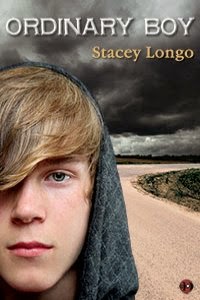 His name is Curtis Price. Until his extraordinary death, he lives an ordinary life on the poor side of town in Osprey Falls, Maine with his mother and older sister. He is the boy that nobody sees, ignored in the shadows of the hallway. He is the kid that is picked last in gym. He is the student that is never called on in class to answer the question, and, after a while, he stops bothering to raise his hand.

It is not until his stepfather shoots him that he is finally—finally—noticed.

Before he meets his untimely end, let him start at the beginning of his tale.

ORDINARY BOY is available in digital and print from Amazon, B&N, iBooks, and other online retailers.