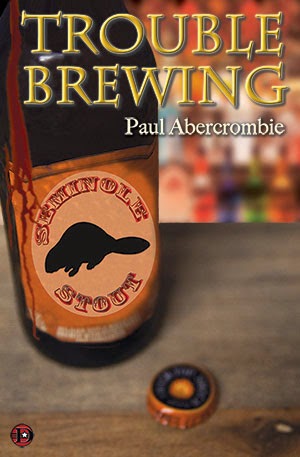 In TROUBLE BREWING, Paul Abercrombie takes a satircal look at just how far some ambitious microbrewers are willing to go to make a name for themselves and their company. With tongue firmly in cheek, Abercrombie delves deftly into murder, blackmail, and cover ups, all fine ingredients for an award-winning ale and a great read!

TROUBLE BREWING was released by Dark Alley Press (an imprint of Vagabondage Press in October of 2014, and is available in paperback and for Kindle or Nook.

What was your inspiration for Trouble Brewing?

Well, I like beer. And weird Florida stories. The idea for this book just popped into my head one morning in the shower. Maybe that’s too much information.

Beer and micro-breweries play a big role in this story; is this a passion of yours? Tell us about it?

I can’t pretend to be an expert on making beer. But I do enjoy drinking it. Especially some of the genuinely great craft beers being produced here in Tampa Bay.

If you owned a micro-brewery, what kind of beer would you make and why?

Ha, definitely nothing with added protein of any kind.

Is there any of yourself in your characters in this book?

I don’t think so.

What was the hardest/easiest part of writing this book?

Hardest was, as I imagine with most wannabe authors, forcing myself to sit and write. Easiest was fantasizing about having written it.

What about dark fiction is a draw for you?

Who doesn’t want to be scared and laugh at the same time?

Probably some deep character flaw of mine.

Except for the curious lack of groupies, it’s about what I imagined.

Wow, can’t say that I have a favorite genre.

Who is your favorite author or poet?
Again, I don’t really have a single fave.

I’d like to hope all the ones I liked.

Stuff like Hemingway’s The Sun Also Rises; anything by T.C. Boyle, Charles Portis.

I try to put in at least an hour or two every workday morning.

No, but now I’m inspired to get some.

I’m plotting out another novel.

I have all sorts of goofy ideas, but I’m trying to force myself to concentrate on the next one first.