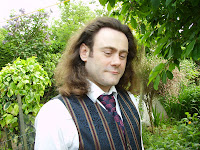 Jon Hartless was born in the 1970s and has spent much of his life in the Midlands and Worcestershire, England. He is the author of three bleakly humorous science fiction books under his own name, and two even bleaker works under the pen name Barnabas Corbin.
His humorous historical satire, Jack The Theorist, is available on Amazon.

When did you first realize you wanted to be a writer?
About the only time I was happy at school was when I could write a story, so I suppose it grew from there.

Why do you write?
I simply enjoy it enormously.

Is being a writer/poet anything like you imagined it would be?
I never imagined the attitude of most publishers and agents, who simply reject your work out of hand without even bothering to read it. In the past, I’ve sent stuff off via snail mail on a Monday and get it back by Wednesday with the claim it ‘wasn’t right’. The quickest rejection, however, was by email; just under ten minutes.

What do you think makes a good story?
Simply ask: does it work by its own logic? If the answer is no, it has failed.

What's your favorite genre to read?
Probably murder mysteries, but recently I have been drifting more into factual works.

Who is your favorite author or poet?
Arthur Conan Doyle, for his brilliant style, characters, and ideas. EF Benson, for his wit and satire.

What books or stories have most influenced you the most as a writer?
Probably a mix of the above, plus some of Oscar Wilde’s work. I also enjoy the 1890s as a period, so the fin de siècle is bubbling about somewhere in the subconscious. Certainly my one book, Romanticism Lost, was inspired by popular figures from nineteenth century literature; Sherlock Holmes, the Phantom of the Opera, Frankenstein etc. I just wondered how such characters would fare in today’s grey, bureaucratic, health-and-safety world…

What books or stories have most influenced you as a person?
I’m not sure I could isolate any; we’re all a product of so many influences…

Where/how do you find the most inspiration?
Sometimes from a direct source, sometimes from years of seeing things, reading about a subject, hearing things etc, until they all mesh together. My YA novel The Wolves of Androcolus combined both these elements.

I was watching a documentary about BBC children’s television from the 1950s to the early 00s, and Jacqueline Wilson popped up to explain the concept behind her Tracy Beaker series.

As often happens in the modern media, where the audience is treated as a brain dead entity, we were only given a brief snippet of Miss Wilson before we jumped to another scene, so all she had time to say was that the story revolved around a girl in a foster home that nobody wanted, and then the scene shifted to something else.

This, however, left me with practically the whole plot laid out in my mind for my story. Why would no one want a girl from a home? Because she was an ex-junkie. Who would want her? Someone with very dark intentions. Who are these people with dark intent? Religious werewolves. Why religious werewolves? Because of what I’ve seen and read on religious fundamentalism over the years. It was all there, laid out, ready to be written…

What does your family think of your writing?
My big brother is very proud.

What is your work schedule like when you're writing?
Hectic. I work full time, so I have to snatch whatever time I can to write. My latest project has been mostly written in my car between jobs.

Do you have any writing quirks or rituals?
The nearest thing to a ritual I get involves getting distracted from doing any work…

Is there anything you find particularly challenging in your writing?
Good grammar. I have to edit time and after time to get the prose flowing.

What are your current projects?
I’m writing a YA novella that reworks the Pandora myth. In it, we see what the world would be like if the moral minority were to attain supernatural powers that enable them to recreate the world as they think it should be.

What are you planning for future projects?
I must try and get started on the sequel to The Wolves of Androcolus, but it is finding the time.

Do you have any advice for other writers?
Edit ruthlessly, get some input from someone who knows what they are talking about and who will give a truly honest opinion, and keep trying.

Where else can we find your work?
At Double Dragon Ebooks, and also third party retailers such as Kindle, Nook, Fictionwise etc. I am also published under the pen name Barnabas Corbin.
Posted by Sarah J. MacManus at 7:00 AM