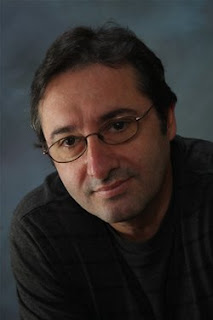 Jack R. Johnson currently lives with his wife and daughter in Richmond, Virginia. His short stories have appeared in U.S. and foreign literary magazines and his novel, Arges, was top listed in the Fish First Novelists literary contest out of Ireland. He produces a local radio module called Hidden Histories which can be streamed at WRIR.org or can be heard via local airwaves every Monday, Wednesday and Friday at 10 a.m. on 97.3 FM in Richmond, Virginia.

When did you first realize you wanted to be a writer?
Probably when I was editor for a college newspaper back in my early twenties. My entry point to serious writing for public consumption was journalism; but for fiction, which is a different creature, it may have been earlier when I developed a series of comic strips about my family. I kept them hidden for years for fear of ticking off someone; but they were loads of fun.

It depends on the type of writing. For the non-fiction work which includes my radio show [Hidden Histories], and radio interviews, a lot of that is putting scripts together for on air discourse or commentary. These are usually heavy on facts, and historical references, light on dramatic effect. For fiction, the purpose of writing is not to regurgitate what I've read or think in some easily digested format, but to discover what I know. The effort is all about discovery. Discovering characters --who they are, what they'll do, what their lives will look like. Without characters, there is really no point to this, outside of some financial benefit--and, my accountant informs me that writing may not be the easiest route toward early retirement.

Is being a writer/poet anything like you imagined it would be?
In some ways, sure! I drink a lot and tend to have a good time with my friends--but I'd probably do that even if I didn't write. At the end of the day, it's just work. There are no great writers, hell, there aren't any good writers, who don't spend a large portion of their life perfecting the craft. A few poets--Rimbaud, for instance--may get away with a burst of creativity that carries them into posterity, but for the rest of us, it's a daily chore. Now days I think what limited recognition comes our way is something akin to an act of grace.

What do you think makes a good story?
I am remembering a few of my favorite stories -- Italo Calvino's Marcovaldo series (the seasons of the city), Nathaniel West's Miss Lonely Hearts, Gogol's The Nose, Faulkner's Old Man. They all have highly dramatized situations. In a few, there are surreal elements, and with Gogol, of course, a deadpan absurdity which is wonderful--and much funnier than anything Kafka wrote.

I think there is a poetic sense of voice. Frequently, a story will recommend itself based on a single line: Salinger's A Perfect Day for Banana Fish has the memorable 'She was the type of woman, who, for the sound of a ringing phone, would drop exactly nothing.' Nearly every one of Faulkner's works contains a jewel or two. Other stories have little vignettes, or parables that stand out. One Southern writer I know wrote at length about candies they received on Valentine's Day promising 'VD'. That is an anecdote worthy of Harry Crews. Those are the bright spots that make a story stand out. However, channeling Gertrude Stein, there still has to be a there, there--characters changing at some level, conflict, as Faulkner said, 'the problems of the heart in conflict with itself'. Some of the avant-garde types might argue against this. Robbes-Grillet for example tends to write descriptions of rooms as stories with potentially manifold meanings, but I do not have the patience for that -- and I am not so sure the reader does either.


What's your favorite genre to read?
I'm all over the map. Recently I've been reading Richard Russo's Empire Grill which is a hefty novel that feels really light while you're reading it and contains memorable blue collar characters. What kind of genre is that? Romance, family drama, comedy? It's somewhere in between or a conflation of all of these. I also like Carl Hiassen's enviromental/comic novels about Florida politics, TC Boyle's historical dramas and his comic short fiction, Gore Vidal's political/historical fiction, William Faulkner when I am feeling sad or a glutton for rhetorical excess, Vonnegut's shtick which is some strange amalgam of science fiction, fantasy and social commentary. I tend to stay away from the heavily typed genres--romance, adventure, science fiction, mystery; although I have once or twice dove into a John Grisham novel and thoroughly enjoyed the ride.

Who is your favorite author or poet?
I don't think a reasonable person can answer that question without cheating somehow. For poets, I really love Rumi & Rilke--I'm not sure if they are my 'favorites' but I tend to turn to them more often. Rilke can be so incredibly tender, it is heartbreaking. Mayakovsky is also excellent and fun, as is e.e. cummings. For authors, the sky's the limit, it probably would make more sense to talk about a favorite set of works: Gogol's Dead Souls, Delilo's White Noise, West's Miss Lonely Hearts, Dostevesky's Notes from the Underground, Miller's Tropic of Cancer, Kundera's Unbearable Lightness of Being, Nabokov's Lolita etc...

What books or stories have most influenced you the most as a writer?
Stylistic influences are hard to gauge, not because they don't exist, but because I consciously try to avoid imitating anyone. I suppose, if I were to look at my fiction, I'd say it's more like a John Irving or Anne Tyler, though I haven't read that much of either. My daughter, bless her soul, compared some of my writing in An Animal's Guide to The Great Gatsby, which I found wildly off the mark, at first, and then she pointed to some obvious symbolism, especially of East Egg and West Egg and the use of the Sauer's Seasoning Chef and I thought, well, what do you know? But, truth is, she probably just wanted to use the car on Friday night.

I do tend to favor the pared down narrative, distrust strong adjectives without sufficient emotional distancing. It probably has something to do with being raised Catholic.

What books or stories have most influenced you as a person?
What we're really asking is which books have moved me to change my life? Or changed my view of life? I think those books tend to be more philosophical in intent -- Dostevesky's Brother's Karamazov, for example. Passages of Rumi where he yells at you to get rid of the nafs! (we Christian types would call them temptations); and then, of course, the writings of Henry David Thoreau especially On Civil Disobedience. In that vein, there are also a slew of environmental writers that have affected me -- Edward Abbey, whose Monkey Wrench Gang is delightfully transgressive, Annie Dilliard's Pilgrim at Tinker Creek with it's echoes of Thoreau, Barry Lopez's Arctic Dreams and finally, Daniel Quinn's Ishmael.

Where/how do you find the most inspiration?
Mostly true life stories, bent just enough to keep them interesting; although of late, I've been doing some non-realistic stuff that seems viable. We'll see.

What does your family think of your writing?
They're generally supportive, but a bit suspicious. After Animal's Guide, my mother thought I spent too much time pontificating. Especially, I suspect, the parts where I deliberated on the impiety of Christians and their general lack of philosophical consistency. In the novel I'm currently trying to put together, there are no family members, just friends. By the time I finish my writing career, I may be the most hated man on earth.

What is your work schedule like when you're writing?
I have an insane work load--40 hour work week for bread and butter stuff and then I do three radio modules each week for Hidden Histories, plus my fiction writing. I try to carve out about two hours every day for fiction, usually first thing in the morning. I'm happy to squeeze out 3-4 pages a session. If I miss a page here or there, I usually make up for it on the next go around, but there is no denying the need for a routine.

Do you have any writing quirks or rituals?
Right now, I'm happy just to have a straight two hours of relative silence. In my undergraduate days, I used to be able to write with people partying in the room next door, U2 wailing from the speakers, drunks in the bathroom, etc... I even used to be able to write a synopsis of Kierkegaard in that kind of environment. No more. Now, I really value just a little quiet so I can hear my own thoughts.

I think some of my more esoteric leaps into what a philosopher thought about such and such might be off putting in the context of fiction, but I always remember that the etymology of novel isn't 'story' or 'narrative': it's 'new' ...

I have three big projects in the works. Two novels I want to roll out shortly--one is a kind of hybrid Edward Abbey /Miguel Cervantes with environmental concerns. The other is actually more of a novella that I've been toying with for years about a Roma girl (gypsy) who avenges her family's massacre in Romania during the fall of Ceausescu. Finally, I've a novella or collection of thematically related stories I'm fine tuning entitled Decalogue which will be a re-telling of the ten commandments through more or less contemporary parables set in the United States.

I'm currently half way through a novel on a 'Beckian' radio personality, a men's dream group and a would be shaman that get caught up in a catastrophic hunt for the archetypal CNN 'missing blonde' -- this is the novel with a few of my friends in it. If/when it gets published, I'm moving to Greece :-)

Do you have any advice for other writers?
Spare no one, least of all yourself.

Where else can we find your work?
Vagabondage Press, Amazon.com, Barnes & Nobles, plus local bookstores and art galleries in the Richmond, Virginia area--especially the Fountain Bookstore in Shockoe Bottom, God bless them. For audio work (Hidden Histories, Interviews, etc.) listen to 97.3 FM, locally, streaming at http://wrir.org, or the podcast at http://www.radio4all.net.