"In the Storm" debuts today 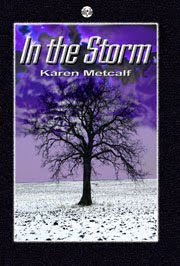 Vagabondage Press is proud to present "In the Storm" by debut novelist Karen Metcalf.

I first came upon "In the Storm" in the Vagabondage Press slush pile. The story drew me in with its brilliant imaging and the is-it-real-or-is-she-losing-her-mind dilemma of the heroine.

"In the Storm" is the story of a teenage girl trying to protect her brother and herself from their abusive stepfather, when she discovers her life choices may not be her own to make.

Abandoned by the world around her, Carly believes she is fated to a life of torment at the hands of her stepfather and is desperate for an escape. When she can bear the abuse no longer and gives in to a thunderous rage, she suddenly finds herself in an unfamiliar, yet beautiful, storm world.

This limbo between dimensions appears to be her private sanctuary, but it may just be her purgatory.

No one escapes fate without sacrifice, but is the price more than Carly is willing to pay?

One of Karen's strengths is the imagery she creates in her writing. Here's an example of some of the beautiful description she uses in "In the Storm":

The sky is quickly darkening as the sun retreats behind the trees across the field. The night sky sweeps forward to erase the day, like waves washing away footprints, leaving only clean, black sand. A star peeks out with one eye and signals to the rest that the coast is clear. They creep out of hiding one by one and join it, twinkling with excited conversation. The moon is only a sliver tonight, like a hammock, inviting the stars to play.

"In the Storm" is a must-read for all fans of young adult literature. It is a story that will stay with you long after the last word is read.

See a teaser for it here. Be sure to watch it full-size with your volume turned up.

"In the Storm" is available in digital formats from Vagabondage Press, Amazon, iBookstore, Smashwords, Issuu and more.

There’s a phrase in the South, “telling stories,” which means telling lies. Growing up, Karen Metcalf told a lot of stories, which wasn’t always a good thing.

She was raised on the Outer Banks of North Carolina, where she spent most of her time reading science fiction and horror. She continues to explore those worlds through her writing, today.

Karen is 23 years old and lives in Tucson, Arizona.

You can follower her on Twitter or visit her on Facebook and Selfari. Also be sure to check out her blog tour schedule.
Posted by N. Apythia Morges at 7:00 AM