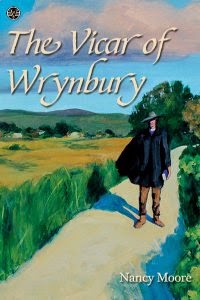 Vagabondage Romance launches historical romance novel, THE VICAR OF WRYNBURY, by debut author Nancy Moore. The book explores the lives of Ann Gladwyn and Cyril Dunstan as old world propriety and formality slips away under the stresses of The Great War in turn of the century England.

As the Edwardian era fades into WWI, Cyril Dunstan, a man with a mysterious past, accepts the post as vicar in a small country town of Wrynbury. His benefactor and only ally, Anne Gladwyn, repeatedly attempts to assist the reticent and surly vicar with the task of reviving the dilapidated village church against all odds. Anne hopes to find some purpose to her dull and unsatisfying life as well as solve the mystery of the vicar’s history and demeanor. Their journals and accounts show the tenuous beginnings of a partnership that turns into a friendship then blossoms into a passionate emotional tie that could destroy all they have worked for. In a time when religious and social constructs would never allow the two to satisfy their desires, they must decide what to sacrifice in order to have happiness during the tumultuous early days of the 20th Century.

"Fans of the Downton Abbey television and other period pieces and costume dramas will fall in love with the tumultuous drama as Ann and Dunstan learn to navigate the changing values of the new century," says managing editor, Fawn Neun. "Ann is the epitome of the new woman, headstrong and passionate, and she has her hands full convincing the staid vicar, Cyril Dunstan, to lead with his heart.

"Many readers romanticize the Victorian and Edwardian era as a time of proper etiquette, prim manors, and a focus on beauty and elegance," Ms. Neun continues. "Behind these stoic facades and social rituals were men and women who wanted love and affection and relationships were they could feel fulfilled both in and out of the bedroom. Ms. Moore's novel bravely and honestly addresses how two people face these challenges and what they ultimately find they need to sacrifice."

Nancy Moore graduated from Truman State University, and has worked in publishing, marketing, journalism, and in the non-profit field. She is an unabashed Anglophile who loves Harry Potter, Doctor Who, and Sherlock as well as any historical drama series to come out of the U.K. She currently lives in St. Louis with "the greatest guy ever," her cat, and dog.

For a sneak preview of this fresh new historical romance novel, visit our website. http://www.vagabondagepress.com/bookpreviews/thevicarofwrynbury.html

THE VICAR OF WRYNBURY is available from all major online bookstores in both US Trade Paperback and e-Book format, including Amazon, Barnes and Noble, iBooks, and OmniLit, as well as on the Vagabondage Press website at http://www.vagabondagepress.com