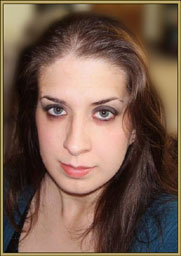 Sarah-Jane LeHoux resides in Southern Ontario with her husband, and her ever growing horde of Machiavellian cats. For more information, please visit www.sarah-janelehoux.com.

Her young adult novella, MY SANCTUARY, is available on Amazon and Barnes & Noble.

When did you first realize you wanted to be a writer?
I’ve always enjoyed creating stories. I am a natural introvert, and as a child, I’d spend hours reading and day dreaming. As I grew older, I took up a pen in place of my dolls, and would write little stories that I’d read out in class, much to the chagrin of my teachers. However, it wasn’t until I was in my mid-twenties that I began to write in earnest, and only after finishing my first novel, Thief, did I realize that I wanted to make my writing more than a hobby.

Why do you write?
I write to express everything I’m not able to express in real life. As I’ve mentioned, I’m an introvert. I have a difficult time in social situations, and keep a lot of things bottled up inside. I write as an outlet, as a way to work through various issues, both current and from my childhood. Or to be blunt, I write to shut up all the voices in my head.

What was the inspiration for My Sanctuary?
The inspiration for My Sanctuary, like most of my work, was a dream. I have no idea what that dream was now, but I remember it happened on a Saturday night. lingered from my dream was a sense of loneliness and depression, and the next morning, I began to research orphanages. I read true life accounts from a man who had been in and out of orphanages all his young life, and I felt that same sense of loneliness. I realized that I wanted to tell the story of a female orphan. It wasn’t long after I started work on My Sanctuary, that I realized it went beyond the orphanage, that it was, at its heart, a coming of age story.

What sort of research did you do for the project?
I was raised Catholic, so it seemed only natural to have the Church be the back drop of my story, considering the issues the story raised. I relied on my memories and childhood beliefs to flesh out the details. I also did a good deal of internet research on the 1950’s, the time in which the story is set, in order to make the dialogue as realistic as possible.

Do you see yourself in your work?
I don’t see myself, per say, but I do see aspects of myself. I am a survivor of childhood abuse, so I drew on that to help me create not only Dot, but the other children and even the adults as well. Each character has some piece of me in them, be it sadness or anger, hope or despair, victim or abuser.

What do you think makes a good story?
I think a good story is one that is more concerned with character development than plot. Just look at Hollywood movies as proof. All the explosions and car chases and special effects in the world don’t leave the indelible mark that a truly well-rounded, well developed character does.

What's your favorite genre to read?
Horror is my genre of choice, judging by the number of horror titles I have on my book shelf. But if I go by what books I reread until the spines break and the pages rip, it’d have to be historical fiction, particularly women’s historical fiction.

I also read a lot of non-fiction books about mythology and folklore.

Who is your favorite author or poet?
Again, it’s hard to pick a favourite. I don’t really pay much attention to who the author is when I pick out a book to read.

What books or stories have most influenced you the most as a writer?
I think it is the non-fiction I read that influences me the most as a writer. They make me want to explore different themes, and not just rehash the same old stories I grew up with in my culture. They also help me to understand universal truths, such as love and death, which helps me create realistic motivation and character arcs.

What books or stories have most influenced you as a person?
This is going to sound kind of silly. I don’t even remember what the name of it was. When I was in grade school, we read a story about a young girl collecting water for her family. She finds a small glass bead on the river bank, and picks it up. She then saves a woman from a crocodile attack. When she gets home, the first thing she does is tell her mother about the bead.

It was that story, and that teacher’s explanation, that made me think about my life, and realize that my way of living was not the way other people lived. I think it was the beginning of my understanding that I was not the centre of the universe.

I wish I knew the name of the story and of the author who wrote it because I’d love to read it again.

Where/how do you find the most inspiration?
Most of my inspiration comes from my dreams. I have, for as long as I can remember, had very vivid dreams. I also experience sleep paralyses on a regular basis. This is when the mind is awake but the body is still asleep. It can create some pretty intense hallucinations, and is what many scientists believe is behind many ghostly encounters and astral projection.

I’ll either have a great that I remember in great detail from beginning to end, or I’ll have a dream that leaves me with an emotional response to a few fleeting images. Of course, when I wake, these dreams are at the forefront of my thoughts. I go over them, try to interpret them, expand upon them, and suddenly want to write them down in the form of a story.

Usually, a story will start with one dream, but then be expanded upon with numerous other dreams by the time it’s finished. It never ceases to amaze me how all these dreams, sometimes months apart, can join together to create one cohesive tale.

What does your family think of your writing? My husband is very supportive of my writing. He’s the first person I show a new story to when it’s finished, and he’s gotten used to it when I start talking about my characters as if they’re real people. I don’t think I’d have accomplished as much as I have if it weren’t for his encouragement.

What is your work schedule like when you're writing?
I have a very physically and emotionally demanding day job--I work at a veterinary hospital—so my biggest challenge is not only finding time to write, but finding energy to write. I try to write at least five days a week, but I only write for as long as I feel up to it. It’s very important for me not to try to force a schedule on my writing. Although it is work, I don’t want it to become a chore. Sometimes I can write for hours on end. Other times, I’ll write five lines and call it quits for the day. This means that I don’t get a story done as quickly as some other authors are able to, but it does mean that I keep my sanity.

Do you have any writing quirks or rituals?
Not really. I don’t want to become dependant on any one thing to write, so I don’t have any rituals associated with my writing. I’d say the only thing that is a must is music. I need it both as background noise to drown out neighbors and traffic, and also to help get me in the right frame of mind. If I’m writing a sad scene, I’ll put on a play list of sad songs to help set the mood. Sometimes, one song in particular is key to helping me finish a scene, so I’ll play it on repeat until the job is done. Thank goodness for headphones, or I’d drive my husband mad.

Is there anything you find particularly challenging in your writing?
Writing is a solitary activity, by nature, and sometimes it’s hard to keep going without feedback from others. I want to make sure I’m doing a good job and that I’m on the right track, but I also can’t stand the idea of anyone reading it until it’s finished.

I’m also a bit of a perfectionist, and if I can’t get a scene right on the first try, it leads to much moaning and groaning about how much I suck. Never mind the fact that I know it’s a work in progress and that there’s a little thing called editing. I can’t go further with the story until I make each section as good as I can. This causes a lot of delays, and I end up obliterating all the deadlines I set for myself.

What are your current projects?
Currently, I’m editing Masquerade, the third novel in the Sevy series. The publisher, Mundania Press, hopes to have it ready for release in the near future. I’m also working on the first draft of a comedic fantasy called Red Rover.

What are you planning for future projects?
I currently have a list of fourteen story ideas that I’d like to someday write. I’ve made mini-synopses of each and ranked them based on how complete the ideas are and which ones I think will take priority. Once I’m finished with Red Rover, I’ll choose my next project based on this list. Any other plot bunnies that hop my way in the meantime will go onto the list and be ignored for the time being so that I concentrate on my story at a time.

Do you have any advice for other writers?
Write a lot. Most of what you write will be garbage, but some of it will be gold. Get used to reviewing your work with a critical, objective eye. Learn how to separate yourself emotionally from your work so that you can see its flaws and correct them instead of defend them.

Research the industry, and learn the steps involved in getting a story published. Be polite and professional in all your correspondences.

And most of all, keep your chin up. This is a rough job, from start to finish. You will get your feelings hurt and your ego will take a beating. Develop a tough skin and believe in yourself.

Where else can we find your work?
My novels, THIEF and SHADES OF WAR, are available at a variety of book retailers, including Amazon, Chapters, and Barnes and Nobles. Please visit my website www.sarah-janelehoux.com for links to purchase either the paper back or e-book versions. Also on my website, you’ll find links to a list of published short stories and flash fiction I’ve written that are free for you to read and hopefully enjoy. J
Posted by Sarah J. MacManus at 7:00 AM