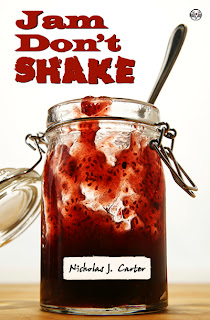 Nicholas J. Carter is a UMass Boston alum, currently living in Massachusetts with his wonderful wife. He credits his mother, a librarian, with his love of words, and his father, a smartass, for showing him how they don’t always mean what they should. Outside of his family, nonsense and chaos are the two things he loves most. His blog may be found at http://adequategusto.blogspot.com.

His tongue in cheek dystopian, JAM DON’T SHAKE, is available from Amazon and Barnes & Noble.

When did you first realize you wanted to be a writer?
It didn’t really strike me until I was about halfway through college. I had all the usual boyhood dreams: fireman, comedian, post-apocalyptic barbarian chief; but I’ve always read a lot and writing felt like the next logical step.

Why do you write?
I needed a creative outlet and lack the steady hands of an artist, the keen eye of a sculptor, or the massive balls of a comedian (can I say that here?). My mother is a librarian, so we always had books in the house. My father is a smartass so there was always someone around to show me the many-faced aspect of words. I felt like I was most prepared to write, if I was prepared to do anything creative.

Is being a writer/poet anything like you imagined it would be?
It’s more work, and not just on the stories themselves. The search for places to publish that work never ends.

What do you think makes a good story?
I like a story that begins halfway through the wringer, or even all the way through. A story where the farm boy finds the magic sword, defeats the troll and saves the princess can get boring. One where the sword breaks and then the troll marries the princess and beats the farm boy until he’s so disfigured his own people shun him, is interesting. That is to say, I find the motivations of ruined characters make for great stories, because why should they do anything when they have nothing left?

What's your favorite genre to read?
Fantasy, typically. I like to see things that I can’t find in this world. Anything a little left of reality works for me.

Who is your favorite author or poet?
Terry Pratchett. I think he doesn’t get as much respect as he should just for being a fantasy author and a humorist, but no other writer comes anywhere near his understanding of human behavior. His characters feel very real. You can open up a Discworld novel and say "Hey, I know somebody like that!" even if said character is eight feet tall and made of stone. If we want to go a little more mainstream, gotta go with Kafka. I empathize with the anxiety and absurdity in his stories.

What books or stories have most influenced you the most as a writer?
Most recently I was heartened to hear the story "Toaster of the Gods" by Randall Coots. It came at a time where I wondered if I should write a little more "normal," and ditch the stories about ghostly dogs and UFOs made of cheese, and convinced me that there really are people who want to read strange fiction. Stories about sentient toasters will do that I suppose.

What books or stories have most influenced you as a person?
That’s harder to say. There was a time in my life where I was reading books on Zen Buddhism, and I read in one that if you read books on Zen you learn about those books, but not how to live. I put them down and can’t recall what the book was, which I think was for the best. I like to believe that the best way to learn anything is by direct experience.

Where/how do you find the most inspiration?
Music. Which probably sounds like a cheap answer, but is the truth. I have plenty of ideas but I find that the best ones come as little flashes of light when listening to the right words and the right instruments at the right time.

What does your family think of your writing?
My parents are proud, though I think only my father enjoys my stories. Mom reads a lot but isn’t much for odd or dark fiction. My wife is willing to read anything I write but usually just comes back with a playful "What is wrong with you?" My extended family has been pretty supportive too.

What is your work schedule like when you're writing?
Well, sad to say I’ve only been sporadically employed since graduating college. This means I can usually get 3-4 hours of writing done per day. If my attention span allows, these will be consecutive. If it’s acting up, it’ll be in 10-30 minute chunks scattered through the day.

Do you have any writing quirks or rituals?
None that don’t involve pig’s blood.

Is there anything you find particularly challenging in your writing?
Figuring out characters. It’s incredibly hard to make a character psychologically real, and I envy those who can manage it.

What are your current projects?
Taking up most of my time lately is a project with the tenuous title of "Up in Hell", which is a full-length novel about the adventures of several puppets in, you guessed it, Hell. It’s my first attempt at a full length novel, and a first draft is only a scene or two away from completion as of this moment. I’m both excited and terrified about it. Other than that, I recently realized I have an enormous backlog of half-finished short stories that could stand to be fattened up and sent to market.

What are you planning for future projects?
In the works is a side story for "Up in Hell," and possibly a sequel if it seems worthwhile. As I’ve said above, there are a number of stories just sitting on the metaphorical shelves of my hard drive. Some of them were from several years ago and I’d love to revisit the ideas in each and give them full rewrites.

Do you have any advice for other writers?
The usual things: read a lot and edit often. Also, don’t get too attached to your story as it is or how you think it should be. There’s always something that needs tweaking but if you never stop you’ll never finish anything. Be ready to go where the story takes you.

Where else can we find your work?
Most recently on the podcast Escape Pod, where my story "Wheels of Blue Stilton" took second place in their flash fiction contest. I’ve also been in Dog Eat Crow, Antipodean Sci Fi, Everyday Weirdness and a few other places, and I occasionally show up in Flashshot.
Posted by Sarah J. MacManus at 7:00 AM