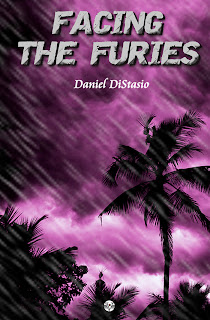 Daniel DiStasio's fiction has appeared in The MacGuffin, Gertrude Press, The Louisville Review, The Minnetonka Review, and Reed and other literary journals. He is full-time instructor of English and Literature and a former editor for General Media. He has worked a s freelance writer for numerous magazines and newspapers. He was born in Syracuse, NY, lived in Kentucky, Key West and now currently resides in Fort Lauderdale.

His novel, the highly lauded FACING THE FURIES, is available from Amazon, Barnes & Noble, and Powell’s Books.

When did you first realize you wanted to be a writer?
At the age of six, I created a world of make believe characters—imaginary friends and teddy bears. After they built homes and a town in my attic, they needed a newspaper to keep up with current events. I realized then I was writer.

Why do you write?
It’s an addiction. I have to get the stories out of my head.

What was the inspiration for Facing the Furies?
When Hurricane Wilma introduced the Atlantic Ocean to the Gulf of Mexico in my living room, I knew there had to be a reason. After my first short story cycle "On the Rock" based in Key West was well-receive by my mentor K.L. Cook, he insisted I write a novel based on the Keys as well.

What sort of research did you do for the project?
I became a weather addict. My favorite web site is the National Oceanic and Atmospheric Administration. I also love Wunderground and several blogs by noted meteorologists.

Do you see yourself in your work?
Furies deals with loneliness and fear. I can relate.

What do you think makes a good story?
Truth. Imagination. Fear.

Who is your favorite author or poet?
I grew up in a Russian- Italian home. My mother read constantly. I fell in love with the Russians: Dostoyevsky, Gogol, Tolstoy, Lemontov and Chekhov. Lately, I am re-reading and loving turn of the century American writers: Jack London, Joseph Conrad and the next generation starting with John Steinbeck.

What books or stories have most influenced you the most as a writer?
Grapes of Wrath, Last Exit to Brooklyn, Wind up Bird Chronicles

What books or stories have most influenced you as a person?
Actually, the stories/songs written by Lou Reed.


Where/how do you find the most inspiration?
I wake up. New experiences are important. Pushing myself to places that make me uncomfortable keeps me alive.

What does your family think of your writing?
They are very supportive.

What is your work schedule like when you're writing?
I have a history of working then quitting jobs to concentrate on my writing. When I run out of money, I go back to work. Finally, I began teaching which I like and gives me time to write so I will probably stick with it. I write in the morning, usually at 5 am or earlier.

Do you have any writing quirks or rituals?
Write every day—even if it is only on sentence. I carry a story in my head with me all the time—I may struggle with a sentence--- and repeat the first few words over and over as I walk my dogs, take a run, drive to work, go to the gym and sometimes by the end of the day, the sentence is finished.

Is there anything you find particularly challenging in your writing?
Titles.

What are your current projects?
I have nearly completed the first draft of my next novel, working title "Calm Waters" about a drug deal gone sour. If it were a Beatles’ song it would be "Money Can’t Buy You Love."

What are you planning for future projects?
A short story cycle about the animal nature of humans called "Animalosity" and a gay romance set during the Gold Rush in Alaska.

Do you have any advice for other writers?
Keep writing—every day—writers write.

Where else can we find your work?
A number of my stories are available on line at literary journal sites.
http://www.summersetreview.org/08winter/happiness.htm
http://www.minnetonkareview.com/IssueOne/dan_distasio.html