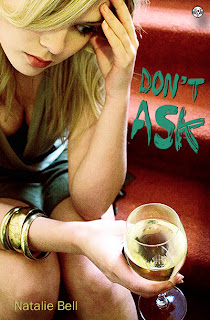 Natalie Bell, a Southern California native, spends days working for a marketing firm, and nights typing away on her computer, working on her creative writing. She currently lives in Maryland with her amazingly-patient fiancé and endless array of house guests.

Her new adult novel, DON’T ASK, is available at Amazon, Barnes and Noble, and Powell’s Books.


When did you first realize you wanted to be a writer?
I never really had an "aha!" moment when it came to writing. It’s always something I’ve enjoyed doing, and so I started to do it more and more. And so, honestly, I think I was a writer before I even considered if I wanted to be one.

Why do you write?
I believe Lord Byron actually said it best, "If I don't write to empty my mind, I go mad." Writing is calming to me. It’s an escape. It’s a way of working through different ideas. And perhaps most of all, it’s fun. I feel better when I can write, so I do.

What was the impetus for Don’t Ask?
My own quarter-life crisis. After graduating college, I spent over half of a year looking for a job, not unlike many of my former classmates. I had just gone through a bad break up, had a lot of free time, and was a little lost about where I was headed—or at least wanted to be headed—in life. Since writing has always helped me get through things, I decided I would put the free time to good use and take everything my friends and I were going through, and try to make a story out of it.

Are there any autobiographical moments in Don’t Ask?
Yes and no. Many of the characters were originally inspired by people I have known throughout my life, and as such I did find that they would sometimes try to steal conversations I’d had in the past to suit their own purposes. Sadly (or perhaps happily) my life isn’t quite as interesting as the lives in Don’t Ask, so events have been tweaked, stolen from stories I’ve heard my friends tell, or, for the most part, completely fabricated in the name of telling an interesting story.

Why do you think so many post-college grads are experiencing quarter-life crises these days?
That’s a bit of a hard question, since I can only speak for myself and other friends I’ve talked to who have gone through them, but honestly I think it comes from how different it is to be a twenty-something now than it was even just a few decades ago. We all grew up either being told that once you were out of college you were an adult or at least gathering that from what we saw around us. You went to college, you got a job, you got married, and poof, congratulations twenty-something, you’re an adult.

That isn’t how things are anymore—people are staying in school longer, not being able to find a job when they get out, not getting married until much later—but that doesn’t mean society’s (or even our own) views have changed. Moving back in with your parent’s after graduation? Only losers do that. Not on your way to be married? Come on now, your parents were already married two years by your age. What’s wrong with you?

Some crises might come from something entirely different, but I think the bulk is we’re comparing ourselves to the ideas we have about being an adult, ones we got from watching movies or from our parents or wherever else, and realizing we’re failing. Whether or not we should feel like that, it’s more than enough to send you into a crisis.

Is being a writer anything like you imagined it would be?
I don’t think I ever spent much time imagining what being a writer was like before I started writing. I sort of fell into it, and so it’s been a learning experience more than anything else. Perhaps that’s made it easier in some ways, there have been no expectations to live up to, just some floundering while trying to work everything out.

What do you think makes a good story?
Interesting characters. I’ve always been drawn to stories where the characters drive the story more than the plot. Stories need to have some sense of reality to them and characters provide that. It doesn’t matter how wild or weird the setting or plot is in a story, as long as you can connect to the characters as real people, it’s a good book.

What's your favorite genre to read?
It depends on my mood. For the most part I find myself reading literary fiction, chick lit, fantasy, or historical fiction. I’ll read just about anything, though, if it catches my fancy.

Who is your favorite author or poet?
I have to admit I have a soft spot for Philippa Gregory. She is one of the few authors I know who can make me read a 500-page book in one sitting.

Where/how do you find the most inspiration?
Most of my stories either come from "What if…?"s or from finding an interesting character I want to write about. Either way, I tend to have either a vague premise or a character before any sort of plot or setting. I’d say about half the time something comes from them.

What does your family think of your writing?
I’m very lucky in that my entire family has always been very supportive of my writing. My mother is perhaps one of my most vocal promoters, always trying to get her friends to read things I have written, and my fiancé is amazingly understanding when he ends up waiting an extra ten minutes for me because I’m in the middle of writing a scene and won’t stop. I have had nothing but support from everyone in my family, and am very grateful for it.

What is your work schedule like when you're writing?
Oh, nothing else is going on right now? Where did that notepad go? I tend to write whenever I get a chance, so it can be anything from writing for ten minutes while waiting for a friend to get coffee or an entire afternoon when I’m home alone and have nothing else that needs to be done for once.

Do you have any writing quirks or rituals?
I have the odd habit of subconsciously acting out my dialogue when I’m really into a scene. I have gotten some very strange looks from people sitting in a room with me while I’m writing a scene with two characters fighting. My mother has assured me my face looks rather comical at times.

Is there anything you find particularly challenging in your writing?
Becoming too emotionally invested in the characters. As my writing tends to be character-driven, at some points what happens in a story is determined by how the characters react rather than what I personally would have happen. That means, even if I’m attached to a character, if they’d make a bad decision in a certain situation, they’re going to make that bad decision. It can be a little taxing when you really care about a character, but still have to let all of this bad stuff happen to them. I’ve more than once gotten myself into a bad mood because of it.

What are your current projects?
As always, I am scribbling down ideas whenever they come to me, but for the moment I don’t know if any of them will end up being short stories, novellas, novels, or a few scribbled lines on a piece of paper. I’ll just have to wait and see what sort of stories are there.

What are you planning for future projects?
Whatever comes to me. I’m always writing, so I’m sure there will be something, it’s just always a surprise what.

Do you have any advice for other writers?
Write like you’re never going to let anyone read your writing. At least in my experience, your best writing comes out when you aren’t worried about what your best friend or mother is going to think while reading it. You can always cut it back when editing, or just actually never show it to anyone, the important part is getting it down in the first place.

Where else can we find your work?
My short stories can be found in various literary magazines and anthologies, under various pen names.