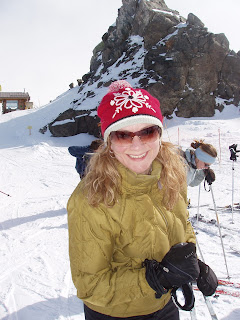 Natalie McNabb lives and writes in Washington State where her dog, Skookum, and cat, Mo, can usually be found beneath the trees of her Eden with a squirrel tail, an exhumed mole, or an up-flung mouse. She loves red — red dragonflies resting on bamboo stakes, red wine in her glass, red flip-flops on her red-toe-nailed feet — and words that caress, tickle, irritate or beat against her soul.  Natalie was a Top 10 for The Micro Award 2011 and Top 25 for the Fish Short Story Prize.

Her story "Nineteen Degrees" appears in the Autumn 2011 issue of The Battered Suitcase.


Natalie, when did you first realize you wanted to be a writer?

I don’t have a specific “A-HA!” moment that triggered I-must-be-a-writer syndrome, but if there had to be a triggering moment, it happened when I was about ten. I had a friend who rode his bike with a pet rat perched on his shoulder. He let me try it too, and we had a great summer biking, losing the rat under the patio and coaxing it back out with some peanut butter, and getting into trouble for nailing our plywood fort to the side of his apartment. We were at that age when the world is still perfect, before puberty sets in and children mock one another for playing with rats or having the opposite sex as ‘just a friend.’ I shared stories from my green cloth-covered notebook with my friend, and he shared them with his dad. His dad read them and told me that if I continued writing I would be very good when I was his age. Though my writing had been nurtured by others, it felt as if he was the first adult who really took my writing seriously. Then, I did too.

I have to write; it’s part of who I am and, if I don’t, I get moody. My husband doesn’t like me moody.

Writing is better than I imagined it could be: it’s therapeutic and you get to ‘live’ in others’ skin. I didn’t have the easiest childhood and teenage years and have probably saved a ridiculous amount on therapy because I write. It’s very freeing—I can floor it the wrong way on the freeway, say good riddance to people I’d like to, or cut a finger off, and it’s all harmless. As well, though, I have found compassion for others I might not have understood if I hadn’t examined a character as deeply as you must to be able to slip into their skin.

A ‘good story’ is subjective, very personal, but I know what I like when I see it. A recent favorite is “Dinosaur” by Bruce Holland Rogers, which I received in a mailing from The Sun. I put the story—all 303 words of it—on my refrigerator at home and bulletin board at the day-job. Another recent favorite is Robert Swartwood’s 927-word“Chameleon Kid,” which I first read on PANK. Lately, I have been leaning toward shorter pieces, because I can read a complete story on the bus or a break at work and still have time to write my own stuff. I think shorter pieces ‘speak’ to our too-busy, ADHD generation for this reason, whether you like them or not.

What I read depends on mood, but I always come back to literary novels.

I love Shel Silverstein, Jane Hirshfield, Barbara Kingsolver (her fiction—especially The Poisonwood Bible—and poetry), John Steinbeck, Mark Twain, Stewart O’Nan and so many others. It’s not fair to make me pick just one!

The Grapes of Wrath, “Dinosaur” by Bruce Holland Rogers, and The Thorn Birds. Why? Not completely sure, but they’re the first that came to mind. Perhaps it’s: the dialogue and reality of the first; with the second, the full-circle, completed feeling you get from a mere 303-word story, proving it can be done in such a short space; and, in the third, it’s the symbolism of that poor little bird singing its heart out as it beats itself to death upon a thorn. Now that I think about it, that’s what writers do, don’t we?

My inspiration comes from the people—with their oddities and beauties—around me and from watching them interact with this great big world around us all.

Almost no one in my husband’s (very large) family writes, and so I think they’re a bit dumbfounded by someone who puts as much into their writing as I do. There is a thread of the arts running through my family though, and some of them probably understand.

I work full-time, like so many writers have to. So, my writing schedule consists mostly of mornings, weekends and lunch breaks. I am always reading or writing though in whatever free time I find.

Nothing odd or special. I don’t write in the nude or anything like that—don’t want to scare the family and pets. Wait. There is one thing. When writing, I ‘go away’ somewhere. My husband can walk in, have a full conversation with me while I’m writing, leave, and—later—I’ll know that he was there, but won’t have a clue what we talked about. This could be used to my teenage son’s advantage, though he hasn’t discovered it yet—that I know of. After an intense writing session it takes me awhile to come around to reality, too. My hope is that I never just stay wherever it is I go off to.

The most challenging part about writing is finding the time.

For the past year, my primary project has been to focus on plot and story, since I noticed I have a tendency to write ‘slice of life’ pieces, basically snapshots that relayed more emotion than story. Once I ramped up the plot and story in pieces I already had going, my publishing versus submission ratio increased. Current writing projects are a novella that began as an exercise in plot and story and flash fiction and poetry as the mood strikes.

I plan to continue writing flash and poetry, but have a novel-length work I started last year. I put it on hold until I got plot and story down, and once the novella I am working on is finished I will go back to the novel.

www.nataliemcnabb.com Links to my fiction, poetry and other miscellaneous writings are all here.
Posted by Sarah J. MacManus at 7:00 AM