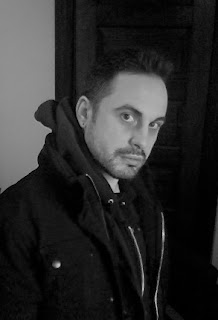 Geoff Hyatt has shown intermittent enthusiasm for electric guitars, vintage psychedelic posters, and ginger ale. He moved to Chicago after surviving the millennium, where he often sits reading a book while waiting for the bus.

His work has appeared in Knee-Jerk, Temenos, Thuglit, Criminal Class Review, and elsewhere. He recently received an M.F.A. from Columbia College Chicago, and attended the Creative Writing Workshop at Western Michigan University.

His novel, Birch Hills at World's End, is available on Amazon and Barnes & Noble.

I’m really bad at math and not very strong or dexterous.

Well, I’m not divorced or alcoholic, so no. Maybe in a few years.

It sounds like a cop-out answer, but I like any "genre" that’s well-executed by its author. For example, last month I read A Visit From the Goon Squad by Jennifer Egan and Conan: The Road of Kings by Karl Edward Wagner. I enjoyed them both immensely, but they’re vastly different works and I evaluate them by different criteria. I don’t read a sword & sorcery novel looking for a story of art and capitalism, the effects of social engineering, and the delicate balance of love and exploitation as creative people grow up and grow old. Conversely, I don’t read a literary novel expecting it will have me ripping through the pages to discover how the protagonist will stop an army of animated stone statues awakened from an underwater tomb. However, both succeed in their own ways, and there is some overlap in the storytelling methods.

What books or stories have most influenced you as a writer?

Most of my formative experiences probably happened when I was young, like most people. My dad read me Robert Louis Stevenson’s Treasure Island, and from that I learned to love the idea of fiction as adventure. Bridge to Terabithia by Katherine Paterson was the first book that made me cry. Man, I bawled my eyes out. It was pathetic. It was the first time I experienced fiction about loss, and the almost narcotic emotional effect it can have. Cromier’s The Chocolate War was the first book that made me angry. I re-read it every year, just to stay kind of angry about everything. As an undergrad, an instructor gave me Johnson’s Jesus’ Son, which gives Midwestern young men everywhere hope their messed-up lives might be able to be re-shaped into intelligent fiction. John McNally’s collection Troublemakers really showed me how hilarious tragedy could be, and I felt a regional connection to it as well.

Why did you choose to write a novel about young people?

I suppose that the problems of adolescents and young people treated with a certain amount of contempt, both in some literary circles and in society in general. The fact is, the main issues teenagers deal with are really the same ones we deal with our entire lives: Who am I? Who should I love, and how? What should I do with my life? Where do I belong? Why do things have to be the way they are? The main difference is that there’s a rawness to it. Teenage life is a more emotionally externalized version of adult life, which makes the story easier to dramatize and get at those issues.

They’ve always been very supportive. In return, I don’t write about them.

I’m a disorganized and random writer and overall a poor role model for artists. I set certain deadlines, like "I need to write these five scenes by August 5th." Then I do. If I slack off, I put everything aside and grind out the pages just under the wire. If I get done well before the deadline, I pat myself on the back for being so productive, then screw around until August 5th passes and I have to set another deadline.

Writing sex. Sex is not a verbal activity for me, at least not in a way that lends itself to prose. But I had to do it for the book, so I went back and read a bunch of sex scenes from novels. The one in Atonement was helpful.

I’m writing a fantasy/horror novel now with a friend. After a literary/contemporary project, I like to do genre work. And vice versa.

It’s a secret. Really, it is. I think someday, though, I might check in with Josh or Erik from Birch Hills at World’s End to see where they’re at later in life.

Just keep doing it. It will take a long, long time. Don’t take things personally. Write what you like and how you are most comfortable. Believe in yourself and in your work, and understand they are two different things. Remember, this is supposed to be fun, like any sport or game. The process of becoming skilled can be frustrating, exhausting, and sometimes disappointing, but it should always be sort of fun. If it gets to the point where it isn’t, don’t feel bad about giving yourself a break as long as you get back to it again. If you are meant to, you will.