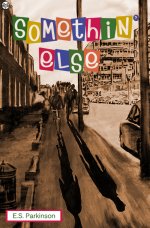 E.S. Parkinson is a writer and historian interested in and inspired by the lives of "ordinary" people. She has worked as a social historian and as a midwife, and these roles impact on everything she writes, in direct and indirect ways. She is fascinated by people’s stories; their ways of making sense of their world and their ways of getting through. She likes cricket, tea, and old books about cooking and housecraft. She lives in Nottingham, United Kingdom with her partner and teenage children.

Her short story "The Red Shoes" appeared in the July 2008 issue of The Battered Suitcase, and her LGBT historical coming-of-age novel, Somethin' Else, was published by Vagabondage Press in March 2012.


When did you first realize you wanted to be a writer?

‘Writer’ seems a very strong word – I probably shy away from it a bit. I do write, I have always written, but there is no particular sense, I don’t think, of wanting to take on that persona. I couldn’t tell you when I first wrote a ‘story’ that wasn’t for school. I scribbled a lot in my teenage years – diaries and manifestos and letters and fragments of places and of people. I struggled with characters though – it seems to be abrogating so much power to create someone. I think I’ve got over that a bit now and maybe it’s because I’m older but I suppose I no longer feel that I can write only about me.

Because I have to. Which sounds really stupid, or egotistical at the very least, but the stories itch in my blood and it’s a relief and a release to get them down on paper.

I’m not a writer, I’m just someone who writes so I’m not sure I can comment. I don’t even feel that I have a particular idea of what a writer should be or how they should live.

I don’t know. I can tell you what works for me, but writer, written and reader are so individual. That is one of the things that fascinates me about fiction – the fact that what I see, what is in my head is so clear, so obvious, but I have no control over what other people will see or even, weirdly enough, how the characters I try to write about will develop and behave. Once you have written a story, once it is out of your head, it begins to breathe on its own. It’s hard to get your head round, and sometimes I panic, but mostly I like that aspect.

I need characters I can care about. That's the bottom line for me I think.

When I was a teenager and in my early twenties I read a lot of fiction. Now days I find I don’t at all. In fact I hardly read anything for ‘pleasure’, I don’t watch television and I don’t go to the cinema.

Larkin for poetry, PG Wodehouse and James Joyce for everything else.

Probably Wodehouse, which sounds daft given my current writing, but he has had a huge influence on me. It doesn’t show except in small ways I suspect; I certainly couldn’t plot like he did. But his writing seems to me to have economy and elegance, and he had the most delicious way of turning a phrase. He’s fun and the best answer to stress and gloom.

I have no idea. I don’t think I’ve lived my life through books at all.

In the everyday. In the people on the streets, in snippets of conversations on buses or in shops. I have, for my ‘real’ working life read and used a lot of oral history and that has been very significant to me. I’m interested in ordinary things.

Writing is very much part of my working life as well as my being this itch in my blood. I write all the time, so I think they’ve got used to it.

This question makes it all sound very grand! I work full time so fiction gets squeezed around this and family life. I write very fast and I write long hand in pencil in A4 notebooks, and then type it up. I tend to work like this because it does mean I can write anywhere – on the sofa, at the kitchen table, in bed, on trains or in cafes. It also works for me because although I can scrawl very fast, nearly as fast as I can think, my typing is very C3. I type one handed, generally using one finger, though I’ve recently graduated onto using my thumb for the space bar. Although I find I have become more adept at writing directly onto a keyboard when its work related, it does impact on my flow of thoughts. Writing long hand and then typing also gives me a first pass at corrections.

I don’t know whether typing one fingered is a quirk or a handicap! I’m not particularly ritualistic because my writing time is opportunistic and time limited.

Possibly all of it.

When I first wrote Somethin’ Else I envisaged it as primarily a two-hander between Jim and Edward, with quite a limited and claustrophobic palate. To a certain extent it stayed like that, but I was caught unawares by how strong a character Jim’s sister Dorothy became. I am currently trying to tell her story, which has overlaps and parallels with Jim’s in terms of the themes of entrapment and escape.

The idea, possibly, maybe, is that Somethin’ Else will be the first part of a trilogy told backwards.

None at all I’m afraid.

You can find E.S. online at her blog at http://esparkinson.wordpress.com/ and purchase Somethin' Else at Amazon, B&N, Powell's or other bookstores both in print and ebook.
Posted by Sarah J. MacManus at 9:36 AM